Access to good quality local scrap is being hampered by increasing exports of this material.

This is according to steel and steel products manufacturer Scaw Metals Group’s head of operations Steve van Wyk at the company’s Union Junction steelmaking plant in Germiston, east of Johannesburg, in an Engineering News article.

He stated that scrap metal was a key raw material for the company, but that increasing volumes of scrap exports also posed a risk to the company’s goal of doubling its earnings before interest, taxes, depreciation and amortisation by 2018.

Van Wyk noted that the scrap industry was extremely competitive in terms of collection and suggested that export tariffs be implemented to plug any gaps in the system.

It had been previously reported that Scaw CEO Markus Hannemann had also expressed concern that securing sufficient scrap metal of the correct quality in order to ensure the efficient and sustainable operation of numerous electric arc furnaces is a key challenge currently faced by the Scaw Metals Group of Ekurhuleni.

The company is hoping that the recent promulgation of new scrap metal regulations will close the loopholes that allow strategic ferrous scrap metal to leave South Africa’s shores and frustrate access to it by local manufacturers like Scaw, which operates large scrap collection and processing facilities that house Africa’s largest scrap shredder. 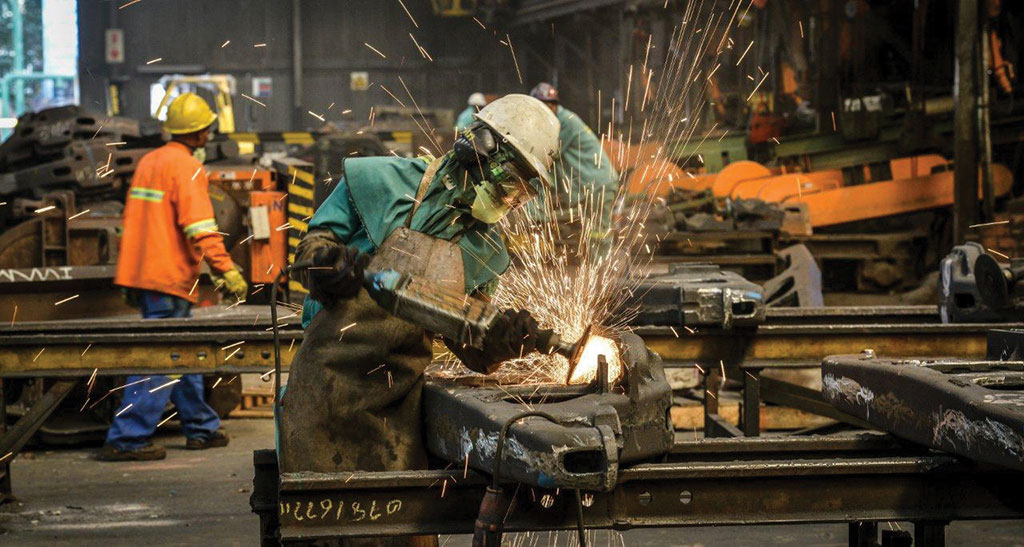 As 100%-recyclable steel is arguably the most recycled material on earth, every new steel product contains steel scrap.

Ninety-three-year-old Scaw produces more than of half-a-million tons of liquid steel a year from scrap and directly reduced iron (DRI) from its three DRI rotary kilns.

“Scaw Metals has plans in place to automate some of its processes. We have a project to install an automated process line by foundry equipment manufacturer Omega Foundry Machinery. This R150 million project started at the beginning of the year and is expected to be completed by the end of the year,” he revealed.

The new process line will enable Scaw Metals to automate and streamline its railway components manufacturing.

The company, which has a yearly turnover of R8 billion and a yearly sales volume of 775 000 tons, also aims to add more value to its products, focusing on downstream product beneficiation.

Scaw Metals’ Union Junction, located on 370 hectares, is the group’s largest manufacturing site, and its scrap-processing division recycles 460 000 tons of scrap a year, with scrap accounting for 55% of the total cost of production.

The Union Junction plant has a yearly revenue of R2.3 billion and sales volumes of 359 000 tons per year.

Opportunities for the plant lie in a cogeneration project to produce electricity using off gases to fire the operation’s boilers, regional infrastructure projects and an increase in African steel consumption.

Scaw, which has manufacturing and distribution facilities in South Africa and Australia and bases in Ghana, Zambia and Namibia, markets a wide range of products that include grinding media, rolled products, cast products and wire rod products, which are supplied to the global construction, railway, power generation, mining, concrete, marine, engineering and agricultural markets.

Scaw’s products have found their way into prestigious sporting arenas like the Olympic Stadium in Sydney, and the stay cables that support the Nelson Mandela Bridge in Johannesburg, are the products of Scaw, the majority shareholder of which is the State-owned Industrial Development Corporation, which has a 74% interest in the group.

Black economic-empowerment consortium Main Street 510 Pty Ltd, which is made up of Inzingwe Holdings, Shanduka Resources and the Southern Palace Group, holds a 21% stake, and the company’s employees own the remaining 5% of the company through an employee-share ownership plan trust.

Scaw also owns the Australian PWB Anchor chain business, which has a manufacturing facility in Melbourne and a distribution network throughout Australia.

Scaw turns over R7 billion to R8 billion a year and employs 7 000 people including contractors.

As an energy-intensive manufacturer with a large reliance on electricity, the need to ensure stable electricity supply at competitive prices is another challenge Scaw is tackling.

The high-chrome ball and forged steel grinding media plants are both located at its Union Junction base in Germiston.

The platinum, copper, cement and power generation industries are the main users of high-chrome ball grinding media, for which Scaw holds a technology licence with industry leader Magotteaux.

The Wire and Strand subdivision, the only South African producer of prestress concrete strand, used to improve the strength of concrete in the production of beams, floors and bridges, produces a range of high-carbon wire products for the construction, mining and industrial sectors.

A significant proportion of prestress concrete strand is exported worldwide as Scaw has achieved the necessary accreditation in all major markets.

The Chain Products subdivision, which is based in Vereeniging, produces the highly regarded McKinnon and Max-Alloy products, which are exported to more than 40 countries worldwide. The Chain Products factory also exports a large percentage of its product range into premium markets such as Europe given the business’s various prestigious accreditations and innovative products.