For centuries, statues have been used as symbols of appreciation for the life and work of the person they seek to honour. Stone, cement, wood, ceramics, marble, bronze and other types of metal such as stainless steel are all materials used to manufacture these statues. In the case of Madame Tussauds Attractions worldwide wax is the preferred material. I am sure there are other materials used but generally speaking a statue is erected in a prominent position in the outdoors and is left to the elements so a hardy material would be recommended.

Pottery is one of the oldest materials for sculpture, as well as clay being the medium in which many sculptures cast in metal are originally modelled for casting. Sculptors often build small preliminary works called maquettes of ephemeral materials such as plaster of Paris, wax, unfired clay, or plasticine. However, any method or material that adds dimension to artwork has potential value to the sculptor.

Typical statues are life-sized or close to life-size; a sculpture that represents persons or animals in full figure but that is small enough to lift and carry is a statuette or figurine, while one more than twice life-size is a colossal statue. The four basic methods for making sculptures are: Modelling, casting, carving, and assembling. 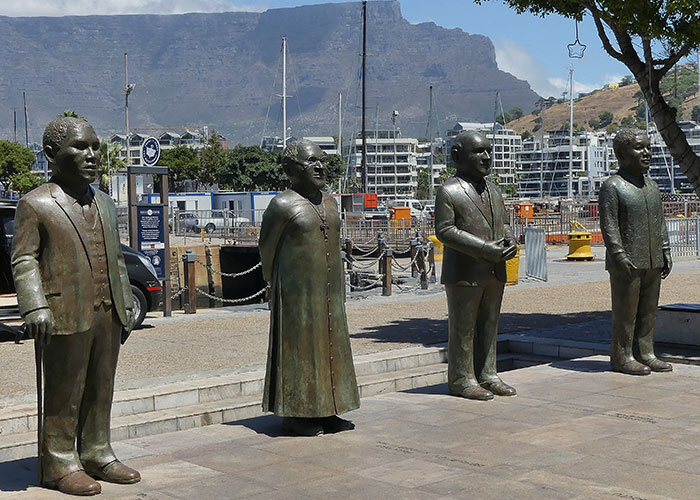 It is said that the Löwenmensch figurine from the Swabian Alps in Germany is the oldest known statue in the world and dates to 30 000 to 40 000 years ago. The material used for this figurine is ivory and it was only discovered in a cave in 1939.

Since democracy was declared in South Africa in 1994 bronze statues have proliferated all over the country and mostly of one particular person – Nelson Mandela – and rightly so. All shapes and sizes of statues of one of the most recognised men in the world are now fixed in areas of interest.

It therefore goes without saying that resemblance is a key aspect of such a token.

It was not surprising then that when a statue of Nelson Mandela was unveiled outside the provincial legislature in Mbombela in September 2018, that the Mpumalanga community was not entirely impressed with the work’s ‘artistic deficiencies’. The artist did defend his interpretation and officials were made aware of his design throughout. Due to pressure he has offered to ‘fix’ the statue before it is destroyed and taken to the scrap yard legally or illegally.

The statue stands at six metres tall and cost government R8.5 million to create, manufacture, erect and have the customary celebration.

An Mpumalanga government spokesperson explained that the R8.5 million was used for design and artwork, clay modelling of marquette, clay modelling of a life-size armature, stainless steel structure of the monument, scaling, mould, plinth marble, plinth concrete, transport of statue and erection. Also in the cost was the integration of other struggle icons (cenotaph) and the celebration events, supposedly. Therefore only R 200 000.00 was available for the celebrations because I am sure the service provider was not liable for these costs. Provision would have had to be made for the cost of manufacturing plaques for the renaming of the seven buildings in the area.

Besides the artist and the paymaster the most important figure in the equation is the foundry that creates and manufactures the bronze. There are a number of art foundries in South Africa and many of them have been producing excellent bronzes that are displayed all over South Africa and the rest of Africa, and the world. They are the important link between the artist and the final display and they will generally take control for the entire sculpting and casting service.

This includes the moulding, waxing, painting, ceramic dipping, the bronze casting, welding, fettling, patina and presentation finish. Some art foundries do offer more services that are available to them these days, using 3D scanning technologies, for example.

Although a small portion of the cost, to safeguard their final product, the art foundry will also arrange transport and installation of the bronze casting.

Without the specialist input of the art foundry you simply do not have a bronze casting or sculpture to admire. For their efforts on average they will charge in the region of R200 000.00 for a life size (1.8 metres) bronze and this can rise proportionately up to R2 million for a
six metre bronze, for example. There are many variables associated with each individual quote for a bronze but reliably one can work with these figures.

In the case of the Mbombela Nelson Mandela statue the service provider is left with R5.5 million after paying the artist and the art foundry. They might argue that they would have to conduct an environmental impact study but the statue was erected outside existing legislature buildings so this would not have been necessary. A nice reward for a bit of paperwork if you can get it.

Then we get Lungelo Gumede – an artist who proclaims that he wants to be South Africa’s Madame Tussauds by pioneering the first wax museum in South Africa. As a wax artist he has made his name by creating wax replicas of struggle icons and other prominent people.

He has now been made even more famous with the reports that the eThekwini Metro (The Durban Municipality as it was known before) was planning to splash out more than R20 million on two ANC statues. Gumede has reportedly been awarded the tender to create the two new statues of Nelson Mandela and Oliver Tambo.

Taking into account the figures mentioned previously – in this case Gumede is artist and service provider – he stands to be rewarded handsomely for his efforts. Depending on the status of the artist they do command different figures. But Gumede had only charged R1.9 million, last year, for four bronze statues of former presidents Nelson Mandela, Thabo Mbeki, and Jacob Zuma, as well as current president Cyril Ramaphosa, which currently grace Durban’s M4 highway. This is a huge price hike for an artist that is relatively unknown. Not much is known about the composition of the two new statues or how they will be manufactured but again taking into account the figures above one can presume that there is a lot of fat in this contract.

Recently there has been a huge outcry by citizens and the opposition of the Malawian Government for the commissioning of a bronze of the controversial late president Bingu wa Mutharika costing K120 million (R2.285 million). However, there might be questions about the person that is being recognised, but what the citizens of Malawi don’t know is that the cost is certainly in line with current costs.

The trend in South Africa is certainly to erect more and more bronze statues and good luck to the art foundries that are benefitting with the work. But one must question: Who actually benefits from erecting bronze statues as symbols?