Considering the high value of the castings it is not surprising that they are subject to comprehensive quality controls including – among other criteria – the specified surface cleanliness. For this reason, the castings with dimensions of up to 12 (L) x 7 (W) x 5 (H) metres and weights of up to 250 metric tons undergo an intensive blast cleaning process. A new custom engineered blast cleaning system, actually one of the biggest shot blast machines in the world, has been designed to fit precisely into the available space at the customer’s premises.

PJSC has strict quality controls in place to ensure the extremely high quality and long service life of these components. For example, all external and internal surface areas of the castings are visually inspected. In addition, they undergo a magnetic particle test or an ultrasonic inspection to search for cracks in the material. This requires a clean surface free of any scale in compliance with the Swedish surface preparation standard SA 2,5. In the past this surface preparation operation was done manually.

Part size and weight and the on-site space restrictions posed a significant technical challenge for the Rösler engineers. But the engineering task became even more difficult, because the customer specifications called for integrating the shot blast system into the overall EMSS manufacturing line. The shot blast machine had to be placed on the foundation of an old water jet blast system in a building with numerous support pillars. At the same time engineers had to ensure that the machine design allowed utilisation of the existing rail part transfer system with turn table for transporting the work pieces from the foundry through the blast machine to the quality control department. Because of the high weight of the castings a spinner/hanger shot blast system was not feasible.

The Rösler continuous rail shot blast system RDS 80/70 is one of the biggest shot blast machines ever built in the world, and is certainly the biggest ever built by Rösler. To prevent spillage of blast media the blast machine inlet and outlet areas are equipped with double wing steel doors lined with wear resistant rubber. The inside of the 30 m long machine is divided into three sections: Inlet and outlet chamber and the actual blast chamber with inner dimensions of 10.5 (L) x 8 (W) x 7 (H) m. The large width of the blast chamber allows complete rotation of parts with a length of up to 7 m during the blast cleaning process.

The RDS 80/70 is equipped with eight Hurricane H42® turbines mounted to the ceiling, respectively one side wall, of the blast chamber with an installed drive power of 22 kW each, throwing over 2,000 kg of blast media per minute. After their first pass through the blast machine parts longer than 7 m are picked up from the transfer system turn table by the existing bridge crane, rotated by 180 degrees and placed back on the turn table for a second pass through the machine. This ensures all around blast cleaning of parts which, due to their length, cannot be rotated on the turn table. For optimum wear protection the blast chamber is fabricated from manganese steel and lined with easy to exchange overlapping manganese wear plates. To allow manual spot cleaning of critical surface areas the RDS 80/70 is equipped with a pressure blast system and lighting in the blast chamber. 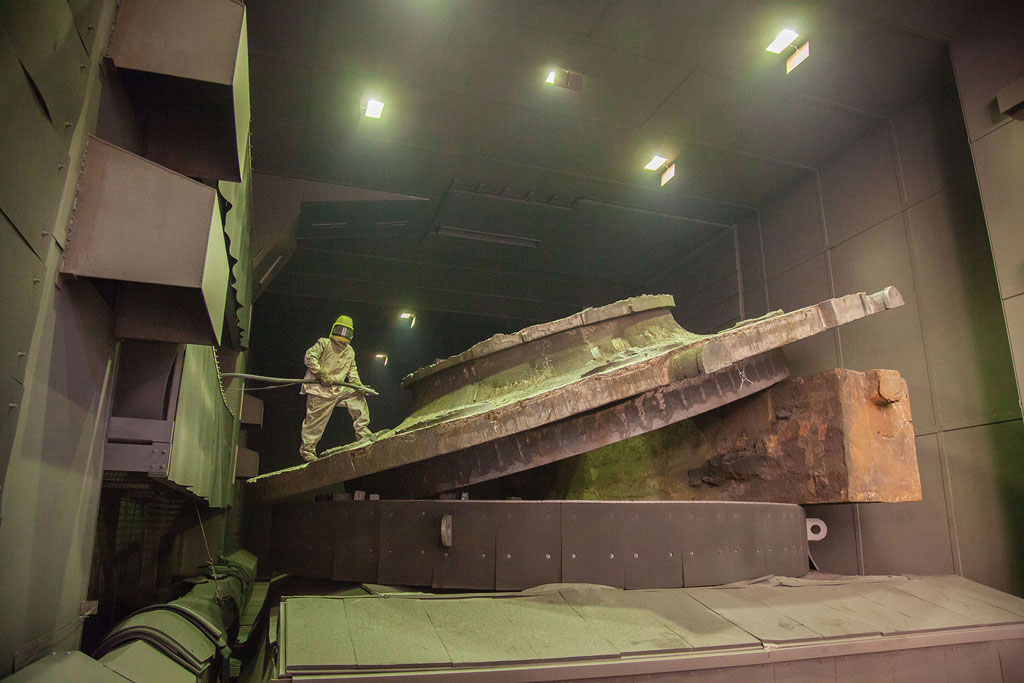 A special technical feature of the shot blast machine is the extra large media hopper allowing the storage of 30 metric tons of blast media. This ensures that even in the case of work pieces, which are extremely cup-shaped, the shot blast process must not be interrupted because of lack of blast media in the system due to media carryout.

A blast machine consisting of many more individual sections than other machines
The blast media thrown by the turbines is collected in two large hoppers placed in the foundation pit from where the media is transferred to the transport system of the media cleaning and classification unit. This posed another technical challenge, because the rails of the part transfer system allowed an access opening of only 2 x 2 m for placing all these equipment components in the foundation pit. For this reason, the media collecting hoppers below the blast chamber had to be fabricated in 15 individual sections instead of the normal 4 sections.